Our son went through a stage, just before his fourth birthday, where he decided that he didn’t want to listen to stories, and had no interest in picking up any of the books on our bookshelf.  He declared that all the books we had were ‘boring’ and that they were stories that his sister liked, even though he had previously enjoyed having them read to him.  He seemed more interested in playing with figures and making up games.  After a chat with his wonderful pre-school teacher (the delightful Mrs Whinney, who is also a mother to three boys), she recommended that we find books that centred around his interests and the toys, programmes or cartoons that he liked, which might just spark an interest in books again.  She told me to think outside of the box and look for things like comics, magazines or annuals – basically anything that might catch his eye.  It was great advice. 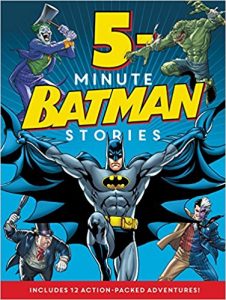 As part of my research,  I came across a series of A4-sized hardback books on Amazon, called 5-minute Stories.  Although they cost slightly more than I would usually pay for a single book (they are around £10 each), they are robust, nice to hold as the hardback is padded, and have a good 10 – 12 individual stories in each book; as a result, I think they are decent value for money.  The colour illustrations on every page are bright, bold and interesting, the stories engaging and the series has a number of different titles (most of which are tied to film/TV programmes – I’ve included a list below).  The short length means that they are perfect for reading if you are stretched for time.  They would also make great birthday or Christmas gifts.  I bought the Star Wars and Batman books and 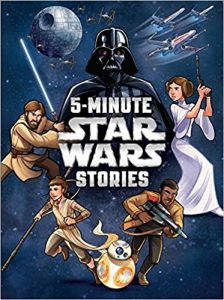 my son immediately came back to the bookworm fold.  He has been selecting them regularly for bedtime stories for the last six months, and shows no interest in moving them from his bedroom bookshelf.  I asked him why he likes the books so much and his reply was ‘I like the pictures and all the different characters and stories’.  I personally like them because we always seem to be running late at bedtime and thus these stories don’t take up too much time, but are a satisfying and enjoyable read for both child and parent. 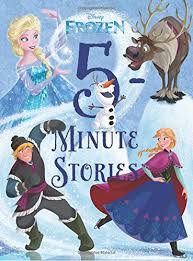 My son has now asked for the Paw Patrol 5-Minute Stories Collection, along with the newly-published 5-Minute Stories Star Wars Strike Back, to be added to his 5th birthday list.  Not to be outdone, my six-year-old daughter also received the the 5-Minute Frozen Stories for her last birthday, which she enjoys having read to her and also likes to read the stories out loud.

There are a whole host of  5-Minute Stories to be found on Amazon, all around the £10 mark.  These are the titles I have found today: